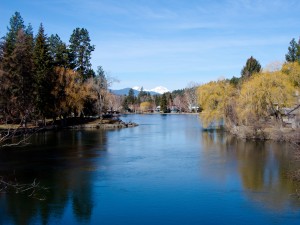 The Mirror Pond Steering Committee has $200,000 it must use to determine how to handle silt build-up in Bend’s signature body of water.

The City of Bend and the Bend Park & Recreation District each put up $100,000 in the last month to fund the search for a silt solution, said Mel Oberst, director of community development for the City of Bend.

“What are we going to do with it?” Oberst asked the committee at a Monday meeting.

The committee is composed of representatives from the city and the park district, as well as William Smith Properties, Inc., which owns the dam upstream from the pond; Pacific Power, which owns the dam creating the pond; and Bend 2030, a civic group. In the one-hour session, the committee decided it will start by pricing how much it would cost to have drawings made of each of the options for the pond and investigating the cost of permits needed from state and federal agencies to dredge the pond.

The options being weighed by the steering committee include not removing the silt, removing the dam that creates the pond, or dredging the pond.

Silt collects in Mirror Pond, forming mudflats that clog the pond on the Deschutes River.

While dredging is the apparent solution, there are many challenges.

They include finding a funding source for the project, which will likely cost between $2 million and $5 million.

The park district considered allotting $425,000 for a study on dredging the pond as part of its November bond measure, but cut it in June.

To move forward, the committee also must earn the approval of the owners of the land under the pond.

The McKay family, one of the pioneer families of Bend, owns about 90 percent of the land under Mirror Pond, Oberst said.

In looking at how to handle the silt problem, the committee will evaluate whether the city or the district should buy the land. Before those discussions got too far Monday, Bill Smith — who developed the Old Mill District — said the steering committee should reach out to the McKay family. Smith’s company also owns the Colorado Avenue Dam, just upstream of Mirror Pond.

“We should get a feeling from the McKays (of) what they are willing to do,” Smith said.

Oberst is doubtful either the city or the district wants to buy the property. The committee is planning to reach out to the public to gauge its sentiment about the future of the pond.